Last week we saw not one, but two NFL head coaches sent to the hospital for different health reasons. The first coach was the Denver Broncos’ John Fox, who felt dizzy while playing golf near his Charlotte home and was later sent to the hospital. Tests revealed that Fox had to have aortic valve replacement surgery immediately. The 58 year-old Fox had successful surgery earlier this week and is expected to miss several weeks.

Fox was released from the hospital November 8. In his absence, the Broncos have named Defensive Coordinator Jack Del Rio interim coach. Del Rio was the obvious choice, having previously coached the Jacksonville Jaguars from 2003-2011. With Peyton Manning at quarterback, the Broncos will be fine.

The second head coach to experience health problems was Houston Texans’ Gary Kubiak who collapsed at halftime during the Texans game vs. the Indianapolis Colts. Kubiak reportedly suffered a “mini-stroke” or in scientific terms, a Transient Ischemic Attack. A TIA results from loss of blood flow to the brain, causing temporary loss of function. The good news is that these are treatable and have no lingering effects. As of November 4, Kubiak has been reported as alert, coherent and in good spirits.  He is back, coaching the team.

We wish both coaches a speedy recovery back to the sidelines. 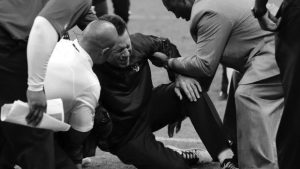