On Saturday November 2, the SUNY Oneonta Women’s cross country team hosted the SUNYAC Championships. SUNY Geneseo came away with first place in the meet, but not before Oneonta’s women’s team made history. Oneonta placed higher than the program ever had and managed to surpass rival Cortland by three points in a tight race for second. Senior Danielle Kennedy led the way for the Red Dragons, and had a lot to say in an interview for The State Times.

Q: How did you feel going into SUNYACs at Fortin Park last weekend?
A: The days leading up to a race are always stressful and nerve-racking, but the nerves before SUNYACs are so different than any other meet of the season.  It’s a meet where focus is key, and it’s important to be confident in all of the training we’ve done this season. As a team, we really prepared ourselves to race as one of the top teams in the conference, and as the results point out, we did just that.

Q: Did you anticipate breaking a school record?
A: Well, as far as times go, I technically haven’t ‘broken’ the school record for the 6k, yet.  That’s actually a goal for regionals.  However, I did make the record books as the highest place finisher at a SUNYAC Cross Country Championship in program history.

Q: On Saturday you have the NCAA Division III Atlantic Region Championship at Lechwork State Park. Who else qualifies for the regionals this season?
A: Every team in the Atlantic Region attends this meet, and last year, we finished 13th. We have recently been ranked as the fourth team in the region, so our hopes are high leading into the meet as we aim to finish as one of the top four teams in the region. We are definitely contenders for a bid into the NCAA Championship meet in Indiana at the end of the month.

Q: What are your thoughts on the team this season and your four years as a runner for Oneonta?
A: Over the last four years, I am so proud to be part of the cross country and track and field programs at Oneonta. The Cross Country team has come so far in only a few years, and with such a young team, I am confident that our legacy is going to grow even more. Coach Angelo Posillico recruited a strong group of incoming girls, and they are really stepping up.  After receiving a National Ranking (which was also a program first) a few weeks ago, followed by finishing as runner-ups at the Conference Championships, we have great momentum going.  I really enjoy seeing all of the hard training we’ve put in finally paying off.

Q: Last meet you made Oneonta history. What are you anticipating for Saturday’s big meet for yourself and for the team?
A: As a team, our only focus is to move on to the NCAA Championship, and to do so, we need to finish as a top three team on Saturday. We have had such an awesome season, and we all trained really hard, so I’m very optimistic for another chance to make school history.  And as an individual, I just want to lead my team to the highest finish in program history. Obviously, the NCAA Championship is the final goal, both as an individual qualifier or team bid, but we don’t have to be superstars, we just need to keep doing what we’ve been doing, and that’s racing hard.

Q: What are some of your favorite memories of being on the cross country team here at Oneonta?
A: I’ve had a lot of great memories over my four years on the cross country team, but I think that I speak for all of the women on the team when I say that my favorite part is just spending everyday with my teammates, and pushing each other to work harder. After Saturday’s finish, I was so proud to be a Red Dragon and lead the team to our highest finish ever, but our great team chemistry is what really holds us together. We always support and encourage each other, and I believe that is the reason why we have been so successful. I’m so happy to be part of this team, and the friendships I’ve made and the accomplishments we have achieved are things that I will never forget.

Danielle Kennedy showed her modesty in her interview, but there’s no question she’s one of the best runners Oneonta has ever seen. She will lead the team in their big meet this Saturday at Lechwork Park in Geneseo. Good luck to all the Red Dragons. 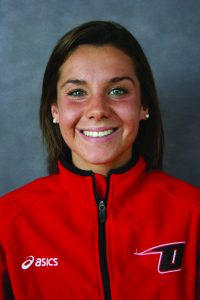