After the Yankees failed to make the playoffs for only the second time in the last 19 years, they went into the offseason, not only with questions regarding their player personnel, but also in light of manager Joe Girardi’s contract coming to an end. Girardi did mention that he’d love to come back to manage the bombers, but added that the decision would be a family one, which would include the best interests of his wife and children.

In his first season managing the club in 2008, the Yankees failed to reach the postseason as they had bid a somber farewell to their old ballpark. This disappointing season ended with many questioning whether Girardi was the right man for the job. Critics were indeed silenced when the Yankees won the World Series in 2009 against the defending champion Philadelphia Phillies. All of a sudden, Girardi, who was once criticized, was now marching through the streets of New York City, sporting his new championship ring in the greatest of fashions at the Yankees championship parade.

The last few seasons haven’t ended well for New York, with early playoff exits and this season missing the playoffs completely. Typically, when you’re rooting for this team, you get so caught up in the success you feed into the “all or nothing” attitude. This team with such a  high payroll only has one goal: to win championships. If they don’t, the season is considered a failure.

Despite not winning a championship since 2009, the Yankee organization made it clear they wanted Girardi back. He was coming off a season that would typically be labeled as unsuccessful, but in a weird way, might have been his best one with the club. This season was a flat out nightmare. Injuries, contract talks and controversy surrounding the Alex Rodriguez saga put the Yankees in a predicament that they could not overcome. But Girardi did a marvelous job keeping this team in it until the end.

When the season began, writers had this Yankees team finishing dead last in their division with no shot at making the playoffs. Girardi had these guys playing exceptionally in the beginning of the season, but eventually injuries did catch up to them, as they were offensively anemic. However, they got hot at the end of the season and did make a run for the wild-card. They came up short, and the team was in their offseason quicker than they had planned.

The roller coaster season was over. It was time to make some moves. After other teams expressed interest in the signing of Joe Girardi, the Yankees made their pitch and he decided to re-sign with them for four years and $16 million, according to ESPN sources.

The Yankees made the right move, and got their guy. There’s no question that he’s the best manager for this team. Even when they were depleted, he had them out there battling and in the race. Girardi has always been great at being able to utilize the talent on the roster. He managed a Florida Marlins club in 2006 that was dreadful and still had them competing in route to his first Manager of the Year award. In an offseason where the Yankees are in the worst shape they’ve been in for as long as can be remembered, so far, so good.

This signing is the first step to getting this team back on the right track. Now, Joe Girardi must deliver some more championships for this team in the near future, especially with their rivals over in Boston fresh off their World Series victory. 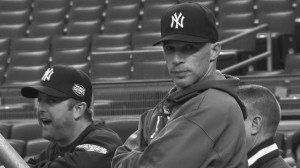