One of the biggest disappointments during the early part of the 2013-2014 NHL season has been the New York Rangers. Last season, the Rangers made it to the second round of the playoffs before being eliminated by the Boston Bruins. Even though losing early in the playoffs wasn’t what they wanted, the Rangers still showed that they were good enough to compete for a championship. During the offseason, the Rangers fired John Tortorella and hired former Vancouver Head Coach Alain Vigneault to try and jump-start their offense.

Through the Rangers first 12 games, they have a record of 5-7, which has them tenth in the Eastern Conference. An obvious reason for this tough start is because of their new coach. Throughout the Tortorella era, the team was best known for its defense first attitude. All players were required to back check and go down to block every shot towards goal. Tortorella believed that good defense will lead to good offense, but Vigneault’s style revolves around offensive creativity. He wants the Rangers to push the puck forward and attack the opposing net. With these two vastly different styles, the Rangers became prone to making mistakes and then not knowing what the right positioning is in this new system. As the season progresses they will learn how to play responsible hockey under the new style.
Another reason for their slow start had to do with their schedule. Since Madison Square Garden was being renovated, the Rangers were forced to start their season on a ten game road trip that started on the west coast. With a new coach and a new system in place, the Rangers struggled against teams like the Anaheim Ducks and the San Jose Sharks in the more talented Western Conference. The game against the Sharks was one of the worst games in the history of the Rangers franchise. They lost 9-2, while giving up four goals to rookie Tomas Hertl, who scored a goal between his legs,which will be on hockey highlight reels for the next century.

The Rangers were unlucky as well. They are one of the most injury riddled teams in the league. New York started the season without forwards Carl Hagelin and Ryan Callahan, who both missed the start of the season due to torn labrums in their shoulders. Callahan came back for the October 7 contest against the Los Angeles Kings, only to break his thumb blocking a shot five games later in Washington against the Capitals. Hagelin returned to the lineup October 29 against the Islanders, which seemed to give the offense a bit of a boost, giving the Rangers a 3-2 victory.

A major injury concern for the Broadway Blueshirts involves superstar forward Rick Nash. Nash is the most talented offensive player on their roster, who can seemingly turn any average play into a legitimate scoring chance. During the same game that the Rangers were thrashed by the Sharks, Nash took a shoulder to the head from Sharks defenseman Brad Stuart. He left the game with a concussion and has not returned to the lineup since.  Ranger fans should be a little nervous because there is no official time recovery for head injuries. Nash has not practiced since being injured and may remain out of the lineup for a major chunk of the season.  Goaltender Henrik Lundqvist has also missed a few games due to an undisclosed injury, but has come back and seems to be playing like his normal all-star self.

While it has looked bleak for the Rangers, there have been some bright spots. After a disappointing season last year, forward Brad Richards has bounced back nicely with eight points in his first nine games. Another good sign for the Rangers is the play of their young stars. Chris Kreider and J.T. Miller, who both started the season in the minor leagues at Hartford, have both become integral parts of the team’s power play and top two lines. Rookie goaltender Cam Talbot has also been a strong backup, having a goals against average of less than 2.00 when Lundqvist is out of the lineup. Having a solid backup will give Lundqvist adequate rest throughout the season, keeping him fresh for the playoffs.
It is still very early in the season and the Rangers have plenty of time to get back in the playoff hunt. 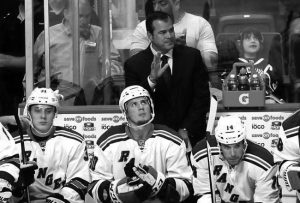