When you’re a football player whose nickname is that of a massive, man-killing, evil robot (Megatron), you know you’re doing something right. Standing at six-foot-five and running a 4.32 second forty yard dash, Calvin Johnson is hands down the best receiver in the NFL. The Lions’ superstar holds the single season record for most receiving yards, and recently fell just seven yards shy of the most receiving yards in a game. Calvin Johnson’s play has fans and analysts dethroning Jerry Rice as the greatest wide receiver of all time. Rice is an NFL legend; however, are people wrong to think Megatron is as good?

From the start of the 2011 season through Week 9 of the 2013 NFL season, Johnson has 4,466 receiving yards. Over the same time frame, the best stretch of Rice’s career (the second half of 1993-1995), he had 4,102 receiving yards. Calvin Johnson has topped 200 yards six times in his last 27 games, counting the playoffs. Jerry Rice only surpassed 200 yards five times in 332 career games, counting the playoffs. Now it is too early to crown Calvin Johnson as the greatest at the position. But what is it that makes him so dominant?

Johnson possesses a rare combination of size and speed, being able to beat secondaries in multiple fashions, with his gorilla-sized hands, and 11 ft. 7 in. broad jump.  A Dallas Cowboys scout was quoted saying Johnson had “the best broad jump I can remember an NFL prospect having. Johnson has an incredible ability to leap above defenders and meet passes at its highest point. Often times Megatron is double and triple teamed by the opposition. However, he almost always beats them thanks to the aforementioned skills.

The son of Newnan, Georgia is on the fast track to the Hall of Fame. He is far and away the best receiver in football, and keeps defensive coordinators up at night. The only problem for him is that he plays on an average Detroit Lions team and will struggle to win that elusive Super Bowl title, which would be the last thing on his Hall of Fame resume. To compare, Jerry Rice has three super bowl rings. 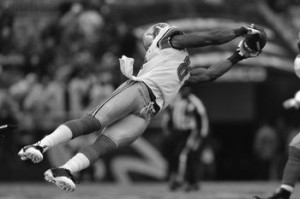