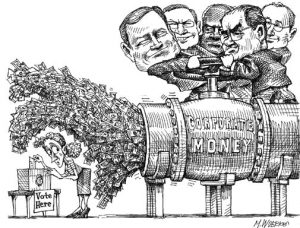 At the beginning of October, the politicians of Washington D.C., too stubborn to compromise, were willing to sacrifice the economic health of the nation in order to ensure they got their way. As a result, hundreds of thousands of Federal employees were out of jobs and the country was mere hours away from being unable to pay any of its bills. Many citizens were frustrated with Congress, whose approval rating is now a mere eight percent. According to the non-profit political organization Democracy Matters, students can help to change public perception.
Democracy Matters was founded in 2001 with the goal of implementing fair elections across the country. Fair elections mean the end of corporate and interest group financing of political campaigns. When an interest group donates millions of dollars to a political campaigner, they expect that politician to vote for bills in the interest group’s favor. This, according to Democracy Matters, has caused the end of true democracy for the country. Politicians are elected by the people and their job is to represent those that elected them. That cannot happen when the politicians represent the interests of whoever gave them the biggest paycheck. The problem with trying to end this style of political financing is that with millions, if not billions, of dollars being given by interest groups, many believe that there’s nothing they can do in order to combat this problem.
According to Joan Mandle, Executive Director of Democracy Matters, the view that nothing can be done is part of the problem, and it’s her organization’s job to change that view among college students.
Throughout history, college students have served as a driving force for political change. In the 1960s, student protests helped to shed light on the excesses of the Vietnam War and spread the message of the Civil Rights Movement. According to Democracy Matters, the number one threat to a fair and representative democracy is the issue of interest groups buying political favors from politicians.
This past year, Albany’s politicians were set to vote on a bill that would bring about fair elections, which would have meant the end of interest groups’ political financing of politicians. However, the bill failed to pass through the Senate by just two votes. Numerous organizations have since rallied, demanding to bring the bill up again for a revote. One such organization is Democracy Matters. With fair elections, our representatives will once again heed the demands of the people. Such an issue is relevant to all, and according to Joan Mandle, it’s in the student’s best interests to demand this change. Whether you’re an education major, a fashion major or anything in-between, having politicians listen to what you have to say is in your best interest.
Until the day comes when a fair election bill gets passed in New York State, politicians will only answer to the corporations and interest groups that hand them a check. If you think there is something inherently wrong with our political system, then contact Democracy Matters and they will channel your frustration into bringing about the effective change that this country so desperately needs.