This one is a shoe-in. Miguel Cabrera will undoubtedly be the MVP. The guy put up ridiculous numbers, the likes of which we haven’t seen for a long time (outside of the steroid era). He finished the season batting .348 with 44 HRs and 137 RBIs while drawing 90 walks. Last season he became the first man to win the Triple Crown since Carl Yastrzemski in 1967. Cabrera was last year’s AL MVP with a lower batting average and he will win it again this year.
AL Cy Young- Max Scherzer, Detroit Tigers

The Cy Young is also an easy call this year. Max Scherzer was baseball’s only 20 game winner, going 21-3 with a 2.90 ERA. Scherzer dominated all year long, going 13-1 by the All-Star break. He was Detroit’s best pitcher, and that’s saying something when Justin Verlander is on your team. Even in the postseason, Scherzer pitched absolute gems in the ALCS only to be failed by Detroit’s bullpen. Scherzer will take home the Cy Young this year.

AL Rookie of the Year- Wil Myers, Tampa Bay Rays
This race will be tighter than the Cy Young and MVP, but ultimately Wil Myers will win. Unlike last year, there weren’t any real phenoms to come up, at least none that compared to the hype of Mike Trout and Bryce Harper. Myers batted a solid .293 with 13 homers and 53 RBI’s in 88 games. He gave a lift to the Tampa Bay Rays lineup and was also pretty handy with the glove in right field. At the end of the day, I believe Myers takes the ROY this season.

NL MVP- Andrew McCutchen, Pittsburgh Pirates
After much debate, the MVP goes to Andrew McCutchen of the Pittsburgh Pirates. Pittsburgh finally broke their 20 year winning season drought and made the playoffs, due in large part to McCutchen. No one is more important to their team in the NL than him. Again, he put up great numbers: .317 AVG, 21 HRs, 84 RBIs and 27 stolen bases. Personally, I think McCutchen should have won the MVP last year but this time he’ll get it. This was a close one to call between McCutchen and Paul Goldschmidt.

NL Cy Young- Clayton Kershaw, Los Angeles Dodgers
This was another close call between Adam Wainwright of the Cardinals and Clayton Kershaw of the Dodgers but I believe Kershaw has the edge. He went 16-9 with the leagues best ERA at 1.83 for a starter, struck out 232 which is the most in the NL, and pitched 236 innings. Kershaw’s W-L record was hurt by the Dodgers slow start but overall he has the best looking numbers in the NL.

NL Rookie of the Year- Yasiel Puig, Los Angeles Dodgers
Puig will win the Rookie of the Year because of his time in the spotlight and his burst onto the scene. He put up good numbers batting .319 with 19 HRs and 11 stolen bases. While he may not be the most likeable guy, the numbers don’t lie. He is a future all-star. 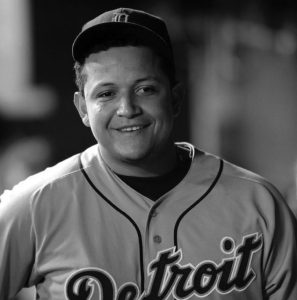