In PBS’ recent documentary “League of Denial: The NFL’s Concussion Crisis,” it became even more clear that concussions in the NFL are causing long-term brain injuries for players. These injuries often cause years of agony and are commonly fatal. While this has become common knowledge to players and fans alike, fans may not understand how long the NFL has tried to hide the truth. PBS investigated those truths, and through great journalism revealed just how bad the denial of the NFL was. For quite some time, the NFL was not willing to reveal any type of information that could hurt viewership, no matter how severe the scientific findings were.

Today however, things are much different. During the lockout of 2011, the NFL Players Association demanded an assortment of rights that the NFL was not providing. Many of the issues being debated throughout the lockout revolved around players’ health and safety. Along with the Collective Bargaining Agreement, the NFLPA and the NFL reached an agreement on players’ safety. New rules would be brought into the league regarding helmet-to-helmet hits, and players would be heavily educated on the health risks of life after football and playing with concussions. This season, the NFL reached a 765 million dollar settlement benefitting former players in a concussion lawsuit.

Richard Sherman is a prolific NFL cornerback on the feared Seattle Seahawks defense. But before that, Sherman was a student at Stanford University. Knowing he had a degree in communications, “Sports Illustrated” writer and NFL analyst Peter King elected to have Sherman write for his online archive, “Monday Morning Quarterback”, on mmqb.si.com. Providing the player’s perspective in today’s game on the matter of concussions, Sherman writes, “A NASCAR driver understands that anything can happen during a race; his car could flip at 200 miles per hour. A boxer knows when he goes in the ring what’s happening to his body. Just like them, we understand this is a dangerous game with consequences not just in the short term, but for the rest of our lives. All of us NFL players, from wide receivers to defensive backs, chose this profession.” He goes on to explain that during his rookie season he willingly stayed in a game when he knew he was suffering from concussion symptoms. Sherman had an interception later in that game that solidified his role as the starting cornerback in Seattle.

Playing through injurieshas always been a part of football and that culture will not change. There may be rules in the NFL preventing players to past their physical limits, but when it comes to winning starting jobs and winning football games, players will do whatever it takes to succeed. As Sherman says, they’re well aware of the risks at stake. He believes that the positives far outweigh the negatives as a player, and the league should just stop interfering with the game. It’s not even a matter of money, Sherman explains, “I played at 5 years old because it was fun. You meet all of your friends, you learn about teamwork, camaraderie, discipline, following directions, how to time manage and how to rely on other people.”
But the facts do remain about the dangers of football; more importantly, the dangers of football in an empire like the NFL. In the PBS documentary, NFL Hall of Fame linebacker Harry Carson was asked about the 765 million dollar settlement for former players. He paused and said, “The NFL has given people 765 million reasons why they shouldn’t play football.” A powerful and alarming quote.
Sherman makes interesting points as well. The information is out there, but will the game ever change? “If you don’t like it don’t watch,” Sherman concludes. 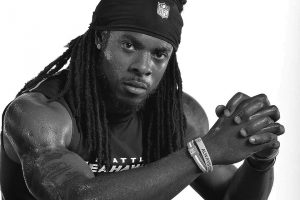