It used to be that “Molly” was the name of a girl down the street. The words “thirsty Thursday” would be a mere example of alliteration. We live in the 21st century where those two phrases have completely changed meanings. “Molly” is the nickname of the drug ecstasy and “thirsty Thursday” is a day of the week.  Times, they’re changin’ alright.
What makes up college culture? Drugs and alcohol are major components of the college experience. If you’re at a college party, these two substances act as the deciding factor if the party is a good one or a bad one, besides the blasting music of course. However, it’s not just college where drugs and alcohol are a big deal- it’s everywhere. They are consistently placed in front of us, whether it’s in a commercial with a hot new artist popping bottles or in songs about popping molly. The only thing that needs to be popped is the idea that you need these stimulants and depressants to have a good time. 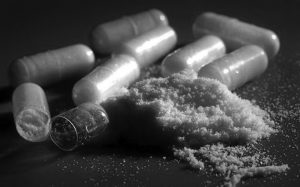 The media tells us that participating in these social acts is what you do in order to “turn up.” For the sake of our generation and the generations after us, it’s important to understand why we should turn down instead. Aside from the legal issues regarding drugs and alcohol, the real issue lies with their effects. For the most part, people don’t care what there is at a party, as long as they can get high or drunk. Those seeking to get wasted don’t have a preference, only heightening the risks they’re willing to take to get that buzz or high. Are we that desperate to relieve stress, fit in or party that we put ourselves in harms way?
It was only a month ago that the musical festival EZOO got cancelled for the abuse of Molly, resulting in two deaths and four in critical condition. Concert-goers tweeted and blogged about the unfairness of the cancellation, claiming that people should know how to “properly” use the drug.

The fact that people know how to use ecstasy properly is a problem in and of itself. Alcohol isn’t something to look past either, especially on college campuses because of “punch,” which can be spiked, leaving students with the constant fear of being roofied. Besides constant media reminders, it is our culture that we have to blame. Drugs and alcohol are now part of the culture that we’ve learned to accept and one that we’ve learned to live in.
The problem is not in “turning up,” it’s the way in which we do so. There is no harm in wanting to have fun and party, but the manner in which it happens needs to be redefined. If people are dying and others are left in serious conditions, isn’t that a sign of how serious an issue its become? Everyone is always up for a good time, just one that leaves them safe. So next time you’re about to “turn up,” just remember there’s always room to turn down.