10 a.m… in a parking lot inNew Jersey… well below freezing. Only   one   thing  would drive a person to put all three of those things together: tailgating. Watching football when it happens isn’t enough. Going to a game is a blessed opportunity that requires an all day celebration. Need not be fooled, tailgating is a very important responsibility.

First things first, there is a lot of prep that goes into a well thought out tailgate. An early Sunday morning decision on what will be featured is a recipe for disaster. An excellent way to theme a taligate is to cook food that the opposing city is known for. If the Philadelphia Eagles are in town, why not make some Philly cheese steaks? Or if the Dallas Cowboys are coming to the Meadowlands, cook up some Texas barbecue. These procedures of good eatery should be prepped days in advance. All meat should be marinated (if there’s no meat your tailgate has failed) and side dishes should be established. Every member of the tailgate should contribute something, but try not to be that guy that just brings a bag of chips.

Once the food is decided, marinated and packaged, the next challenge is the reheating process. A grill is absolutely essential for a fine tailgate, but don’t think it has to be some big shot, four burner with 48,000 BTU’s. A reliable portable grill with a small amount of propane will do just fine. There’s no need to be flashy; it’s about quality, not quantity.
But of course, the most important item at any tailgate is the beer. Not a thirty rack of Natty Light or Keystone, but actual beer. It is up to the tailgate participants to understand their “go to” beer. This type of beer is the symbolic representation of tradition that is featured at every tailgate. If this beer isn’t at that tailgate, you’re messing with tradition. On top of the reliable beer source, a good recommendation is to add an experimental beer. There’s no sense  in having the same thing every time: there has to be something else to add some pizazz. This beer strategy really attracts the best of both worlds in football-beer culture.

Food, beer and passion. It’s really that simple. There is no better feeling than enjoying a tailgate before your favorite team gets ready to go to battle. The anticipation of knowing you get to see another game, another play, another memory creates almost delusional thoughts of your team in this upcoming match up. “Twelve sacks today.” “Eli’s going to throw at least seven touchdowns.” These are common utterances for Giants fans in the heat of a tailgate moment. It doesn’t matter how unfortunate the upcoming match-up may be. During a tailgate, all fans see are their own colors and that’s the way it should be.

What really makes tailgates special are the people you share it with. Aside from your core of friends or family you’ll be watching the game with, the tailgating community is one of the friendliest places on earth. As long as you’re wearing the home team colors, you’re a friend to all. People are there to serve the same purpose: to eat, sip, throw a football and make memories.

No matter the conditions, the tailgate tradition goes on. (This article does not condone the consumption of alcohol on the SUNY Oneonta campus.) 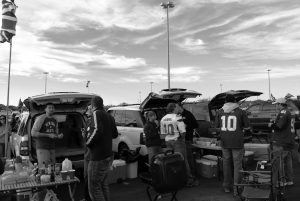