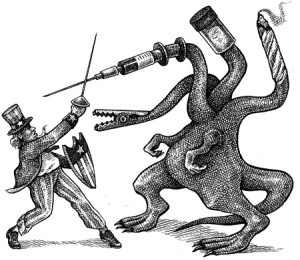 According to the United Nations, due to increasing demand, the global drug trade is now a four hundred billion dollar a year industry. With so much money to be made the availability of illegal substances is at a record high. On top of this, a recent poll suggests that more than 50 percent of Americans support the legalization of marijuana. With the states of Colorado and Washington introducing laws that make possessing small amounts of the drug perfectly legal, another 20 states, plus the District of Columbia, allow for the selling of medical marijuana. It has become apparent, despite the best efforts of the Drug Enforcement Agency and other officials, that the popularity of illegal substances and their acceptance among the general public is on the rise.
Experts in the field have begun to draw a similar conclusion. This past week, The British Medical Journal released a study claiming that, despite increased spending to combat illegal narcotics, the price of cocaine, heroin and marijuana has decreased, while their purity has increased over the last twenty years. The journal concluded that governments’ current tactics in attempting to limit the availability of illegal substances are becoming increasingly unsuccessful and therefore drastic changes must be made. All of this has happened despite the fact that the United State’s government spends thirty billion dollars a year trying to control the use and selling of narcotics.
One country that made a dramatic change in their drug laws is Uruguay. Near the beginning of 2013, the Uruguayan government completely legalized the possession and use of marijuana. Under their new law the government would be responsible for the selling of the drug, with citizens being able to buy up to forty grams a month. The hope being that the sale and use of marijuana will become a more safe and controlled affair while increasing the government’s income thanks to a sales tax. 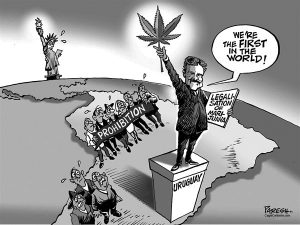 With the United States’ current tactic of zero tolerance and aggressive police enforcement failing, it has been suggested that the United States should change its drug policy as well. One of the main arguments among those who support changing the laws is the country’s prison population. The United States has the highest number of prisoners in the entire world. Between 1985 and 2010, an estimated 31 million people have been sent to prison on drug related charges, meaning that nearly half of the convict population is in prison due to drug related offenses, costing the government sixty billion dollars a year. With so much money being spent on an unsuccessful drug war, the U.S. has begun taking small steps towards reform. This past year, the Justice Department announced that it would shift its policy from arresting small time drug users and sellers to instead focus on large scale distributors. For the first time in history, they’re stating that drug addiction is a medical issue, and should therefore be fought with social and educational reforms, not police raids and prison sentences.
The drug war has failed. Increased spending by the government has not increased results but has instead seen a rise in the use and quality of narcotics. Slowly but surely, governments around the world are accepting this reality and are shifting enforcement policies to target the major players in the illegal trade, while loosening domestic enforcement with the hope of saving money on a failed initiative.