First Losing Season Since 1997,” “Worst Finish Since 1965,” “Adrian Gonzalez, Carl Crawford, Josh Beckett Dealt to Dodgers”. These were the main headlines of a 2012 campaign that saw the Red Sox finish in last place with a 69-93 record. Now one year removed from the brief Bobby Valentine era, the Sox find themselves with the best record in baseball and a spot in the postseason for the first time since 2009.

This is a team with great depth and solid chemistry, due in part to the offseason work by new General Manager Ben Cherington. Over the offseason, Cherington made it a point that the Sox would not be big spenders after dumping over 200 million dollars in cap space. First, former Red Sox pitching coach John Farrell was hired as Manager. Then Boston went out and picked up Shane Victorino, Mike Napoli, Johnny Gomes, David Ross, Ryan Dempster, Koji Uehara, Mike Carp and Stephen Drew. Those names don’t jump off the paper but they are solid players brought in to improve club atmosphere.
The Red Sox also dipped into their dense farm system, calling up Jose Iglesias, Jackie Bradley Jr., Xander Bogaerts, Allen Webster and Rubby De La Rosa. Throughout the season, we saw this team gel and become not only a fun group with beards, but a really good team that looks a lot like the “Idiots” of 2004.

The Red Sox lineup this year has been one of best in the game leading the league in runs, doubles, RBI’s and slugging. They are behind only the Detroit Tigers in hits, average and on-base percentage. Dustin Pedroia is having a typical Pedroia year at the plate, David Ortiz is having a monster year batting .307, Jacoby Ellsbury has regained his 2011 form and the offseason acquisitions have produced. There have been a couple nice surprises for this team at bat. Daniel Nava has had a breakout year batting .295 with 11 homers. Jarrod Saltalamacchia has improved his game at the plate, increasing his average from .222 last year to .266. Though his power numbers have dropped (25 HR in 2012, 14 in 2013) everything else has increased, especially his doubles with 38 this year.

One thing that has been a wonderful surprise is the pitching staff. The staff was dismal last year but has stepped it up. Their ERA as a whole has dropped from 4.70 in 2012 to 3.75, Jon Lester and Clay Buchholz have regained their ace forms, and John Lackey has bounced back well from Tommy John surgery. Other starters Felix Doubront and Dempster have had decent years as well. The Sox acquired Jake Peavy from the Chicago White Sox in July to bolster their starting rotation.They gave up a top prospect in Jose Iglesias, but Peavy has helped carry Boston to October.

Despite season-ending injuries to relievers Andrew Bailey, Joel Hanrahan and Andrew Miller, the bullpen has pitched well in their absence. Closer Koji Uehara has stabilized the back end, at one point retiring 37 straight batters. The return of John Farrell has really had a positive impact on the pitching staff. Overall, this Red Sox team is one of the deepest heading into the postseason. They have grizzled veterans and young players with potential. They have the chemistry, they have the experience and they have Red Sox nation excited for October. This team is set for a deep playoff run and have a good shot at returning to the World Series for the first time since they won it all in 2007. For opposing teams that cross their path in the postseason, fear the beard. 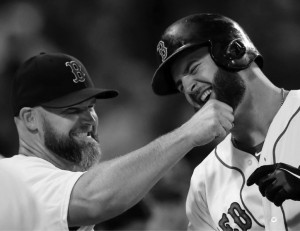