Giants fans of this generation are not used to losing. The last time the G-men lost their first three games of the season was in 1996  under Head Coach Dan Reeves. The Giants went 6-10 that season and were one of the worst offenses in football. A lot has changed since then for Big Blue, and fans rightfully had higher expectations for the Giants than the type of performance they’ve showed so far this season.

Supporters of Big Blue also anticipated a little more heart than a 38-0 beat down against the Carolina Panthers in Week 3. Suffering a loss against an equally desperate team is one thing, but a complete embarrassment? Giants head coach Tom Coughlin admitted that his team was completely “man handled” up front  and that may have been the light way of putting it. The Panthers were able to only send four rushers for the entirety of the game and the Giants offensive line had no answer for it. Giants quarterback Eli Manning was sacked seven times, and was hurried or hit on virtually every play. But the one statistic remains a disheartening fact: a big fat goose egg on the scoreboard.

A shock like this naturally brings a lot of negative media attention towards the Giants’ locker room. Even on seasons where the Giants fell short of the playoffs, Coughlin has not had a Giants team that was below .500 since his first year with the team in 2004. For almost a decade, Giants fans have been spoiled with a high level of exciting competitive football. Now due to recent woes, fans have a tendency to distance themselves from the pain and suffering that’s been seen the past few Sundays.

That type of action is known as being a “fair weather” fan, showing up for the good times but not the bad. Yes, it can be tough to endure when a beloved team struggles, but it’s just not right in nature to do something like that. The definition of a fan reads as a “person filled with single-minded zeal.” That type of devotion to a cause can’t only be on sunny days. That would be contradictory to the very nature of fan hood.
The Giants will look for answers, but on a positive note, the NFC East has struggled as a whole and the Giants can easily be right back in the picture with a couple of victories. It is a long season and the NFL is more competitive than ever before. Teams are still looking for identities in the 2013 season, and a lot can change in a short period of time.

The New York Football Giants under Tom Coughlin have had a reputation over the years of bouncing back from adversity and surprising the media just as they were about to be written off. This idea of bouncing back in the 2013 season is without a doubt the largest challenge the Giants have faced in quite a while. Since 1990, only three teams have been able to clinch a playoff appearance after starting their seasons 0-3, and none of them have won a Super Bowl. The Giants turning this debacle of a season around seems farfetched and unlikely.

There are almost always reasons for a fan to believe. And fans have an obligation to stand by their team through thick and thin. That type of loyalty is an admirable trait and should be held in high honor. As long as there is a mathematical possibility of an optimistic future for the Giants, there’s no reason not to stand by them at all times. The Giants under Coughlin have busted it for fans in the past, and it wouldn’t be justified to turn on them at the first sight of complications. 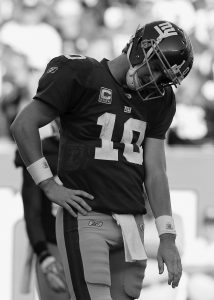