Let’s face it: We love Bigfoot. We enjoy the occasional story of an alleged sighting that flashes on the news. We find ourselves stumbling across a documentary of sasquatch searchers while flipping through channels and hearing the buzz about a colossal footprint found near some campsite out west, even if we don’t admit it.  Let’s not forget Bigfoot’s circle of pals – good old Nessie, the Loch Ness Monster; the Yeti, the Abominable Snowman of the Himalayas; Mokele Mbembe, the living water dinosaur of the African Congo and other legendary beasts who have been culturally adored for centuries. 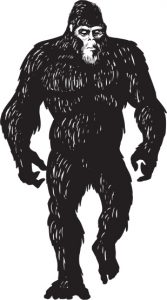 We yearn to delve into the mysterious realm of possibility, relishing the eerie thrill that surrounds what is spoken of, but not proven.  We love adding dimension to a world that is much too often flat.
From a logical standpoint, it’s this deeply rooted desire for the great unknown that fosters our creation of it.  It’s too boring to settle for a commonplace explanation when finding unusual tracks in the dirt.  We want the reasoning to hold a surreal level of intrigue in which we can free ourselves from our mundane lives, so we’re repeatedly guilty of shaping evidence to fit a theory – not the other way around.  Some go so far as to become professional cryptozoologists (people who study cryptids – creatures that are not scientifically recognized) who adamantly advocate for the existence of legendary animals.
Two researchers, however, are fighting to break this cycle of science being fueled by beliefs.  In their new book, “Abominable Science! Origins of Bigfoot”, “Nessie”, and “Other Cryptids”, writer Daniel Loxton and paleontologist Daniel R. Prothero follow the scientific method of deriving probable conclusions through concrete evidence in reference to cryptids. In an interview with Rachel Hartigan Shea from National Geographic, the two authors discussed their mission to denounce folklore, lacking evidence and unreliable eyewitness accounts by instating the basic rules of general science and thereby applying common logic to the plausibility of the creatures’ existences.
“They should have been spotted a long time ago if they really did exist,” said Prothero of the cryptids. “The cryptozoologists never asked the question, “Well, how did the monster get in the lake if the lake was completely under ice, the lakes are all landlocked and there’s no way for a marine creature to get there at all?” Those are all things that are not news to geologists, they’re not news to biologists, but they’re apparently news to cryptozoologists.”  Loxton commented that “failing to find evidence is evidence that that thing does not exist.”
When asked about encounters with people who swore they’d seen one of the animals in question, Prothero stressed that “we are notoriously bad witnesses.”  The legend of a cryptid, when ingrained in someone’s mind, can prompt that person’s sight to be fooled into capturing what would be considered legend.  In this way, peoples’ beliefs in these enthralling myths are descended from their longing to be enthralled.