With Lebron James and the Miami Heat capturing their second straight title last year, many teams in the Eastern Conference will look to finally dethrone them this upcoming season. Two of the top teams happen to be in New York, and both the Knicks and the Nets have championship aspirations.

When the Nets arrived in Brooklyn, they made it clear that being second fiddle to the Knicks was not part of their plans. The idea was simple: We’re here, and now it’s time to own this city.

Of course, this didn’t sit well with any Knicks players. Although everyone in the organization’s respective brass will say the only thing that matters are championships, we all know that each team sits at the throne in this great city that is New York.

Last year, the season series was split 2-2. The Nets had requested to host the Knicks in their home opener, they wanted to make a statement in their first game at the new arena in Brooklyn. Unfortunately, this game had to be rescheduled due to Hurricane Sandy. The two teams battled hard in their four contests, and it was evident that each team wanted to wreak havoc on the other. After Joe Johnson sealed the Nets victory over the Knicks in their last contest, he admitted that the two teams are in a “dogfight” for the top.

Fireworks came in the offseason when the Nets made a blockbuster deal that brought veterans Kevin Garnett, Paul Pierce and Jason Terry to Brooklyn. They also added some depth by signing veteran free agent Andre Kirilenko. This offseason splash did bring some fire to the atmosphere with the uttering of some promised championships. Pierce and Terry have been quoted saying that the Nets are top contenders and will bring a championship to Brooklyn.

If you thought the Knicks players would stay quiet on this one, think again. J.R. Smith vowed that the Larry O’Brien trophy would be hoisted in Madison Square Garden next June. How sure is he? “100 percent positive” says Knicks guard, J.R. Smith.

Both teams come into next season with a load of questions. For the Nets, how will Jason Kidd handle his first year as a head coach with no prior coaching experience? How will he manage the minutes of the Nets’ aging stars? Does Garnett have anything left? Who will close games for Brooklyn, Pierce orJohnson?

One thing that will be interesting is the player-coach relationship between Kidd and Deron Williams. The key this year will be Williams playing like the star point guard he is capable of being, and it will be interesting to see how Kidd can affect Deron’s game, as a future hall of famer himself.

The Knicks come into the season with many goals, as well as some question marks. It’ll be interesting to see what they can get out of both Amare Stoudemire and Andrea Bargnani, two players who have been plagued by injuries over the last few years. When Stoudemire was in the lineup, he began to play well for the Knicks during last season. His 14.2 points per game and five rebounds per game last season were solid numbers. The Knicks will need production from him.

Bargnani gives the Knicks a big man who can spread the floor, which creates space for the guards to penetrate inside the lane. If he can stay healthy, it would be a pretty tough call for Mike Woodson to decide the distribution of minutes for the front court. But this is a problem that many coaches welcome. It pays to have a substantial amount of depth on your roster, especially when you’re looking to make a deep playoff run. Other serious questions they have are: who will start at power forward? Who’s the backup center? What position will Melo play?

The city of New York is up for grabs and many of the fans can’t wait for their respective teams to get back on the floor to settle the score. It looks as though the Knicks may have won the battle last year by winning the division and advancing further in the playoffs, but that’s history and it’s time to see what this NBA season holds in the latest chapter of this rivalry.

These teams will matchup for the first time on December 5 at the Barclays Center. If these two can matchup in the playoffs for what would seem to be a long, epic battle, the city will explode.

Bring on the lights. Bring on the cameras. The city that never sleeps will be more awake than ever. 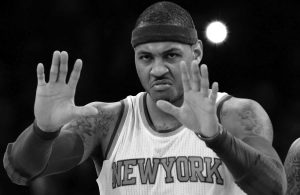