“We are going to Brazil! We are going to Brazil!” These are the words being sung by the United States Men’s National Team and their supporters after a thrilling night on September 10. In order for the United States to qualify for the 2014 FIFA World Cup that night, two things needed to happen. First, the USMNT needed to beat Mexico in Columbus, Ohio. Second, they needed Honduras to beat Panama or have the match end in a draw.

After a disappointing 3-1 loss at Costa Rica on September 6, the United States needed to bounce back and that is exactly what they did. Behind goals by Eddie Johnson and Landon Donovan, the USMNT defeated Mexico 2-0. Tim Howard made some key saves in the first half, giving the Americans time to get their feet under them without surrendering a lead. What made this victory most impressive was that they were playing without their best forward and a key midfielder. Forward Jozy Altidore, who was suspended for the match because he amassed two yellow cards. In addition, Head Coach Jurgen Klinsmann had to make his lineup without his most important player, Michael Bradley. Bradley sprained his ankle during warm-ups of the match at Costa Rica, forcing him to miss both games.

After the game was final, both the players and fans anxiously watched the Honduras-Panama game in hope that the night would end in celebration. When the final whistle blew, the scoreboard showed 2-2, officially clinching a World Cup spot for the United States. There are still two games left in qualification, which the players and coaches will need to take seriously. The more games they win, the higher seed they will get during the World Cup draw.

This was one of the best years in US men’s soccer history and they are currently in a stretch where they have won 13 out of their last 14 games, including wins against high ranked European powerhouses Germany and Bosnia-Herzegovina, both games finishing 4-3.

The key to this team’s success has been in goal and the midfield. Tim Howard is just about as sure of a keeper as there is. His ability to communicate with his defense and not let up big rebounds is unparalleled. When Howard is unavailable to play, Brad Guzan is a more than capable backup.

The United States midfield is one of the deepest in the world. With established superstars in Donovan, Bradley and Clint Dempsey, there are many role players who can fill in if needed. Jermaine Jones’ ability to play both sides of the ball will be important when they face tougher competition. Mix Diskurud is rising amongst Klinsmann’s go to guys, who made an amazing play, getting the ball to Landon Donovan for the second goal against Mexico.

There are still a few questions that need to be answered before 2014 and the start of the World Cup. Klinsmann needs to find a back four who will be able to play mistake free soccer for 90 minutes. Matt Besler and Omar Gonzalez are the two mainstays on the squad. Demarcus Beasley has played a majority of the games at left back, but is prone to turning the ball over. The fourth and final starting spot is up for grabs between Brad Evans (who is currently injured), Steve Cherundolo (who is also hurt) and Michael Orozco.

Another issue that needs to be dealt with is a lack of depth at the forward position. Besides Altidore and Johnson, there is no natural forward who can fill the spot if need be. As of now, either Donovan or Dempsey move from their midfield spot to forward, and make a substitution on midfield. Forward Chris Wondolowski had an impressive streak during this summer’s CONCACAF Gold Cup, but his game hasn’t translated to the big matches. In addition, Herculez Gomez seems to have fallen out of Klinsmann’s favor.

While it is good to clinch a World Cup spot early, team USA is not out of the woods yet. After their inspirational run in South Africa, 2010, there are more expectations for this team to succeed. It is no longer acceptable to just make the World Cup; a run needs to be made. Klinsmann was brought in to use his experience as a player and a coach to have American soccer reach new heights. 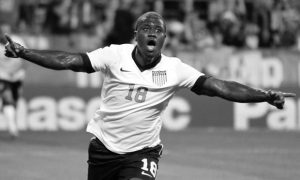