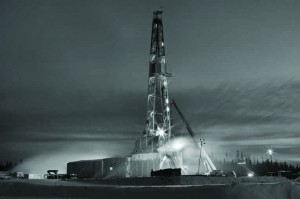 The second term Congressman from Corning wants to increase intensive drilling in New York as a way to decrease dependence on foreign oil. He advocates an “all of the above” energy strategy including offshore drilling and nuclear power, which he calls safe and reliable.
Reed wants to take full advantage of the Marcellus Shale beneath the Southern Tier. He believes that the shale could potentially meet the country’s natural gas needs for the next 100 years. A notion that makes environmentalists cringe. Reed’s statement is based on the assumption that we maintain current consumption rates.

Hydraulic fracturing, or fracking, is a controversial process of natural gas extraction. The process forces gas up and out of the earth by blasting millions of gallons of fresh water, sand and an assortment of chemicals into shale rock at high pressures. These high pressures fracture the shale, forcing natural gas up out of the well. The extracted gas is then delivered through pipelines that lace the country.

Located on the south side of the Susquehanna River in Tioga County, Apalachin is nestled closely to the Pennsylvania border, where the dangers of fracking have already been made apparent.
On Saturday, Apalachin residents hit Congressman Reed with tough questions on pollution, clean water and the potential health impacts of fracking. The health of children in the community was another major concern. Reed sympathized with the residents, saying he understood their fears. He assured residents that he supports responsible and safe drilling. Residents remained wary despite Reed’s attempt at reassurance.

Sidestepping the environmental and health impacts of fracking, effects already documented in Pennsylvania, the Congressman changed the subject to the potential job opportunities fracking offered, claiming “It will put people back to work.” Congressman Reed’s promise of economic growth is especially attractive to small towns like Apalachin with struggling economies. Downtrodden communities are understandably eager to make ends meet however they can, even if that means sacrificing their environment and potentially their health. Located on top of the Marcellus Shale and hard hit by the recession, the Southern Tier is a prime target for the fracking industry.

Governor Andrew Cuomo’s decision whether or not to allow fracking in New York has been complicated by the divide in public opinion. Generally speaking, fracking opponents have been more passionate and more vocal than their counterparts. Anti-fracking groups, like Save the Southern Tier, are hoping their passion may tip the scales in their favor. Cuomo has until Feburary 27 to make his decision.

On top of environmental and health concerns, many New Yorkers wonder how fracking might impact agriculture and tourism in the state. Farm communities fear that fracking could lead to contaminated crops and sick livestock. Consumers have already expressed that they would be reluctant to buy foods produced locally in fracking areas. Towns like Apalachin will have to weigh the risks of fracking with the economic benefits promised by those like Congressman Reed.