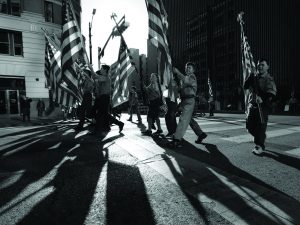 “Every day that the Boy Scouts of America delay action is another day that discrimination prevails,” said Human Rights Campaign President Chad Griffin. The Boy Scouts of America have had a policy for the past 100 years that did not allow for gay members or leaders to join the association. There have been a few attempts in the past to end the policy, with no noticable change.
In 2000, the Supreme Court ruled in a five to four vote that the Boy Scouts have a constitutional right to exclude gay members, because disapproval of homosexuality is part of the organization’s message. Another case that has helped bring this issue to the forefront is an Ohio troop leader; she was removed from her position because she was a lesbian. She created a petition that was signed by 1.4 million people that was against her being dismissed from the group.

On July, 12, 2012 the Boy Scouts association affirmed that they still do have a ban on gay members and leaders joining. Former presidential candidate Rick Santorum has said by lifting the ban it “could destroy scouting.” Also, President Obama, who is an honorary Boy Scout member, has said that he believes they should allow anyone to join and be leaders. The Scouts chief executive, Bob Mazzuca, told the Associated Press that both the leaders and Scouts support the policy.

On February 6, there was to be a vote that would have lifted this ban, but that has now been moved to May. The board for the Boy Scouts was supposed to vote to allow local Boy Scout troops to set up their own rules for what members they will allow in their troops. Instead the board said that they needed more time to get feedback on this decision from their members. The board said in a written statement to the Washington Post, “After careful consideration and extensive dialogue within the Scouting family, along with comments from those outside the organization, the volunteer officers of the Boy Scouts of America’s National Executive Board concluded that due to the complexity of this issue, the organization needs time for a more deliberate review of its membership policy.”

There have been many religious groups that are in support of the ban saying that if they were to allow gay members it would take away the morality of the organization. Many gay rights groups say that the Boy Scouts should not endorse discrimination. The Boy Scouts Association said around a month ago that they will consider changing their policy.

The Boy Scouts of America is the largest institution for young men in the country. But there has been a big decline in membership since the court case in 2000.