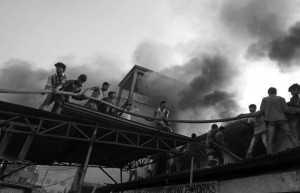 Have you ever purchased clothing in a store and wondered where they were made? There is a good chance that they were manufactured in Bangladesh at a garment factory called Smart Garment Export Factory. Last weekend there was a major fire at the factory that took the lives of seven people and destroyed the entire factory. The fire took place around three a.m. According to The New York Times, workers from the factory said that the emergency exits were locked. The fire is still under investigation. Many employees said they had to break windows to leave the building and get away from the fire. Rozina Begum, a 20-year-old sewing machine operator who was injured during the fire, said in an interview in The New York Times, “We all ran for the stairs, but the exit was locked. By the time the guards unlocked it, smoke had filled the room. There was a mad rush. I tripped and fell. People were stepping on my body. Then I lost consciousness. Someone must have pulled me out.”

This past November there was also a deadly factory fire in the same region at Tazreen Fashions Factory that killed 110 people and injured around 200. Officials say that this fire started in a room filled with large mounds of fabric and yarn; the walls of the room were not fireproof. Bangladesh law states that flammable materials must be stored in a room with fireproof walls. Also, the factory did not have a sprinkler system or a fire escape so all the employees had to use the staircase to exit the building. On some floors of the factory, managers ordered workers to ignore the fire alarm and continue working. Many workers ended up trapped in the building and started breaking windows to jump to the roof of a nearby building. The factory did not have a fire safety certificate which seems to be the case with many factories in Bangladesh.

Both fires have brought up questions on factory safety conditions. Bangladesh factory workers have taken to the streets in protest and Human Rights groups have begun calling for action to make factories safer for workers. The U.S Trade Representative is reviewing a Bangladesh labor eligibility requirement which is under the Generalized System of Preferences. This is a program that gives duty-free trade benefits to companies in the world’s most poor countries. The office of the U.S. Trade Representative is considering suspending Bangladesh’s duty-free benefits until the labor conditions improve there. Also, human rights groups are asking the European companies to do the same. This may seem like a step in the right direction, but many human rights groups and activists do not feel like this is enough. Charles Kernaghan, the executive director for the Institute for Global Labor and Human Rights told Women’s Wear Daily, “Our government should send a significant delegation to Bangladesh to inform the government that in order to keep up this collaboration, workers need to have the basic internationally recognized labor standards. All they have done is talk for the last 20 years and nothing has changed.” The state-run news agency called Bangladesh Sangbad Sangstha reported that around 6,000 people die every year in factory fires in Bangladesh. How many more people should die for the sake of cheaper clothing?