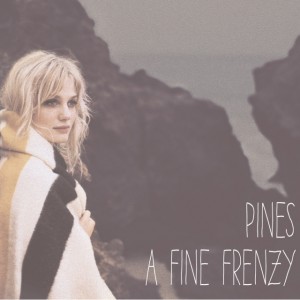 The vast difference between A Fine Frenzy’s debut “One Cell in the Sea” and her second album “Bomb in a Birdcage” showed that Alison Sudol, the lead singer and mastermind, wasn’t exactly content with staying in one place as an artist. Originally making a good name in the female folk-pop category, her departure to a more indie-pop sound was greeted with hesitation by some fans, but ultimately proved to be an inspired decision that paid off well with an even better record. And with her third album “Pines,” A Fine Frenzy again moves away from a previous album, but this time it’s in a thematic sense.

“Pines” is actually a concept album that tells the story of a pine tree who is given the chance to have free will. While the idea can make some people roll their eyes or question the purpose, Sudol’s influences from her trip to the redwood forests in Northern California and the Cascade Mountains are clearly represented throughout “Pines.”

“Winds of Wander” begins with birds chirping before an acoustic guitar is lightly plucked and “Sadseasong” uses the sound of a rocking sailboat to great effect. For other songs, the light, intricate sounds of nature are instead evoked through the careful and relaxed instrumentation that make up the majority of the 67-minute runtime. It’s true, the majority of the album is a quiet meditation on the tree’s journey to finding where she belongs, turning up the volume only when necessary on tracks like the great “Sailingsong” when the pine tree begins her quest at sea and lead single “Now Is the Start” which celebrates her getting a second chance. In less capable hands the album could have easily strayed too far into cutesy animation, but “Pines” is completely grounded by Sudol’s voice, which is as lovely and vulnerable as ever.

Although she spends much of the album from the point of view of the tree or as a narrator, you can still hear every bit of the sincere artist she’s always been. This is never more evident than in the lyrics. “Pinesong” may be the only track where the pine tree is not the subject, but each song proceeding it vividly adds to the journey that the tree is taking. What makes the words so effective is their stark relevance to human life. “Riversong” may be about the tree wondering where she belongs and not accepting anything less than what she deserves, but it’s no accident that she also asks realistic questions everyone asks at some point in their life. Ironically, for an album about a tree, it’s actually one of the most humanistic albums I’ve heard all year.
It’s no surprise that it’s best when played altogether because not all the tracks have the musical substance you might want them to when played on their own. But if you take the time to listen to “Pines,” songs like “Avalanches” and “Untitled (Grasses Grow)” can take you on a journey of your own.