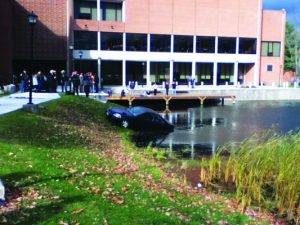 of philosophy at Hartwick College, was rescued from his submerged car Thursday night by Sgt. Nate Leonard of the University Police Department. According to police, the 81 year-old Burrington became disoriented while driving on the SUNY Oneonta campus: thinking that the sidewalk beside the pond at Hunt Union was a roadway. Police went on to say that when Burrington realized he was no longer on the road, he attempted to turn around, which resulted in his car becoming submerged in the pond.
When Sgt. Leonard arrived at the scene, two individuals near the pond identified the automobile, which was mostly under water. At that point, Leonard stated that he heard Burrington knocking on the inside of the submerged vehicle’s window. “I knew I had to go in the water,” said Leonard.
Discarding his boots and gun belt, but retaining his baton as well as a life ring retrieved from the back of his squad car, Leonard entered the pond. Officer Chris Skovira assisted Leonard from the shore, holding a rope that connected to the life ring. Upon reaching the auto, Leonard reported the vehicle’s cabin was filled with water save for a pocket of air around Burrington’s face. When Leonard broke the vehicle’s window with his baton, Burrington exited and the rest of the car went under.
Skovira used the rope connected to the life ring to pull Leonard and Burrington through the near-freezing pond. When the water around them was shallow enough, Leonard carried Burrington the rest of the way to shore. By the time they reached land, an ambulance from the Oneonta Fire Department was on the scene. OFD responders treated both men for hypothermia. Burrington and Leonard were then taken to A.O. Fox Memorial Hospital; they were treated for the minor injuries they had sustained, and were later released.
Officers Leonard and Skovira are both being recommended for recognition for their heroism. It has been reported that Burrington does not remember the accident, though he told the Daily Star he “has nothing but good things to say about all those involved.”