Video games may be fun and remembered for 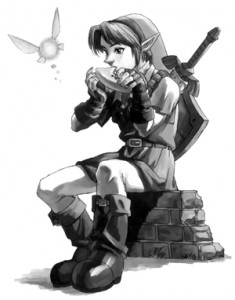 the gameplay or the graphics, but they are also remembered for the music. As video games become more popular, the music does as well. In fact, the scale and effort put into video games music these days rivals that of film music. These five games are some of the best examples of mesmerizing music that can make the player hum it in their sleep.
5. Animal Crossing:
This GameCube game makes doing chores, having a job and paying off debt fun. It’s like some sort of college simulation game. All jokes aside, it’s a relaxing and simpler version of The Sims with animal people. All the townspeople speak in garbled words kind of like The Sims, but there is an option to have no speech if it gets annoying or weird. The music in this game is excellent because it changes every couple of hours when the player is outside. After playing for a while, it becomes natural to imagine the sunny 4 p.m. music while walking around outside to class. There’s also music played by K.K. Slider, the guitar-playing dog. He shares a lot of similarities with the guitar guy that sits near the corner by the Yellow Deli, one being that they both only play on Saturday nights. However, K.K. Slider gives the player copies of the songs he plays for the player to listen to at their character’s house. Some songs are very catchy, even though the words are just scatting.
4. Yoshi’s Island:
This semi-classic Super Nintendo game took a risk by having the player be Yoshi instead of Mario. It’s a fun time, and the music portrays the slightly more lighthearted setting while keeping the intensity involved in the situation of a green dinosaur protecting a human baby. It’s as if the player knows they’re going to get that baby home no matter what, but they will be tested. The boss battle music is really epic, with a fast tempo and a 16-bit organ. It’s a fun, upbeat game that is really enjoyable on rainy days. For a better effect, play it on a Monday, because the happy music will in turn create a happier day.
3. Sonic Adventure 2:
This Sega Dreamcast game is one of the last memorable Sonic adventures, as it was in 3D. There is also a version for GameCube called “Adventure Battle 2,” but it’s the same game. The music for this game is unique in that each character has a different music genre. When playing as Sonic, his levels have a pop rock song. Then when it’s time to be Knuckles for a level, he glides around to a unique rap based on the feel of the level. Rouge the bat has a similar musical style to Knuckles, but instead of rap, the player is treated to classic jazzy heist music as she steals chaos emeralds. The music has a great effect in this way because it not only enhances the atmosphere of the level, but also the traits of the character. Even the music in mini games for the cute chao creatures has its own sense of character. This may start to sound like a broken record, but those chao race songs make walking anywhere fun. These songs are also good for getting in the zone while studying or writing papers.
2. The Legend of Zelda: Ocarina of Time:
This list is very Nintendo heavy, but this game is known by almost every gamer and has to be mentioned. It isn’t up here just for popularity though; the adventure is almost entirely centered on music. The plot of the game involves a musical instrument called an ocarina that performs magic as it’s played. The songs from the ocarina are good atmospheric devices and the musical themes of the places Link goes immerses the player in the world. The Temple of Time has a very ominous Gregorian chant that just fills a room and your imagination so well. It’s hard to picture being anywhere else but in that temple when that song plays. Another good example of the excellent music in this game is the Water Temple song. It has this lingering cascade sound in the background while a flute and powerful hums build a sense of mystery. It makes this hard part of the game seem even more difficult.
1. Killer 7:
To begin with, this game is crazy and super deep on its own. The crazy amount of variety in music it dishes out is just incredible. There is a little tune for every mood change, every fight and every cut scene, if it isn’t simply filled by eerie silence. This game is for PlayStation 2 and GameCube, but the long loading times on the PlayStation version are very distracting from the experience. This game is scary, intellectual, hilarious and weird, and the music handles all of it perfectly. At one point you have to look for an afro-haired cultist in the middle of an empty city in Texas. The music that plays is full of nice western guitar and addictive drum beats. The most memorable song, besides the one near the end, is the song before and after an end level boss. A rave song bursts out of nowhere as the player ascends the stairs to an alternate dimension, about to fight or after returning victorious. It takes on some deep issues and uses a selection of music that brings the best out of this game.