SUNY Oneonta played host on Friday to a Halloween events for kids anxious to don their costumes and collect some candy a few days early. From four until six,a carnival was held for the youngsters in Hunt Union. A host of costumed kids turned up to inhabit this hospitible haunt. The little ghouls were gowned in a melange of costumes: from home-made creations to store-bought suits; from robots to hotdogs; from superheros to ghosts.
After their stay at the Union, the urchins, complete in their habiliments, tore through the dorms collecting tidings from charitable dormers. The festivities lasted until eight o’clock when the banshees gathered their plunder and, parents in tow, vanished into the night. 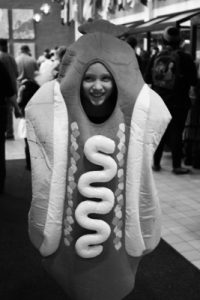