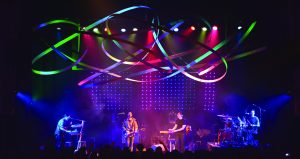 Concert-goers at the Oneonta Theatre on Saturday were treated to a fantastic show with three amazing bands. The main stage was almost unrecognizable, with a crazy swirling helix sculpture suspended above the stage, created by Jeremy Holmes. With multi-colored lights and smoke machines blowing into the air, it was immediately apparent that the audience was in for a one-of-a-kind event. 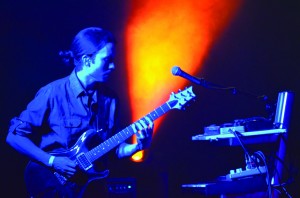 SUNY Oneonta’s own SUCO Funk band started off the show at 9 p.m.with their renowned blend of classic funk tunes and soulful music. It’s not often that an opening band can get the crowd to their feet by the very first song, but the funk band accomplished this feat. They started the show on the right foot and set the tone for the entire evening.

Switching up the musical palette, The Manhattan Project came on next. The electronic duo helped turn the Theatre into a miniature trance-rave. One member played on a drum set, and the other manned a technological bonanza of keyboards, synths and other sound manipulators. Their sound was a tasty blend of dub, trance and techno. The audience was treated to a few dubstep drops and responded with plenty of jumping and vibing to the sounds as the Manhattan Project blew up the Oneonta Theatre. 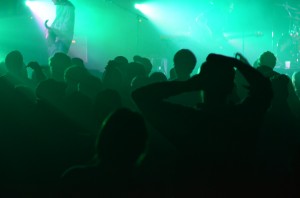 The energy was electric by the time Jimkata took the stage to finish the night off. Playing a two hour set until just about one in the morning, the collective tirelessly commanded the audience and entertained everyone involved. The band played highlights off of their 2012 album “Die Digital,” as well as fan-favorites off of their 2010 EP “Ghosts and Killers.”

Although the band’s sound always sits right in the pocket of electro-rock that is so popular today, they stretch that sound surprisingly well, with a live show that runs the gamut of moods and musical emotions. They showcased their lighthearted side with “Die Digital.” This track is anchored by a bouncy, happy-go-lucky synth line, and is contrasted by stereotypical 80s sci-fi bass amidst a groovy 16th note drum beat. 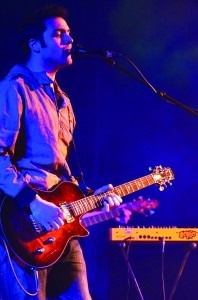 Similar in style is “Devil’s in the Details.” This track soothes the listener with a cutesy guitar melody and peaceful synth work. But hidden underneath is a dastardly bass riff, revealing the other side to Jimkata’s diverse sound.

The mark of a great band is one that can make their songs sound better live than on the recording. Jimkata was at its best when they extended their songs and jammed their hearts out. “Devil’s in the Details” surprised listeners with an abrupt change to a syncopated slap bass line and perfectly mismatched drums.

A screen in the background portrayed flashing green, red and yellow lights that looked like an audio display meter. In addition, the stage lights transitioned colors to the fluctuations in the song, producing a kaleidoscope of sound and color. The members let this groove marinate and the synths run wild, thrashing around on stage as the thumping bass kicked the crowd into high gear. And as the song winded down, every member let their instruments ride out the sound, developing into buzzing feedback. With the dimmed lights and the surging sound waves, it felt like being in some sort of interstellar whirlpool.

Next on the list of body-moving bass lines was “Chalice III.” Starting off with a martian-landing synth, it is paired with a supreme slap bass line. It has such a distinct rhythmic movement; every audience member was swaying left to right in perfect unison. The crowd got very comfortable with this back and forth movement, and with a visual circus of laser lights, Jimkata used its man and machines to produce some seriously sexual sound technology.

After heating up the building, the band brought everyone together with great call-and-and response chanting.

“Roll with the Punches” starts with a cheery guitar riff and a warm blanket of synthesizers. It has a distinctive elation to its sound, building and building until the crescendo chorus. With perfectly simple chants of “woah’s” and “oh’s,” every audience member joined together to belt out the words.

Jimkata was able to do what every band aims for in a live show, and that is to produce a truly memorable experience. The sense of camaraderie and general happiness at the show was apparent and encompassed the crowd. The band reminded everyone what a concert should be all about, with good times and great music filling the air. Jimkata has played at the Oneonta Theatre several times, and the crowd at Saturday night’s show will certainly be back to hear them again next time they take the stage.