Fifty five years ago, a young woman at the age of 34 came out with only one book. This book could have just been another novel overseen by the public, but the young author would have never guessed how much of an impact her novel would make on society. The author of this enticing story is  Harper Lee, and the novel is To Kill a Mockingbird. Lee would go on to win a Pulitzer Prize, and the novel has since become a classic staple of modern American literature.
To Kill a Mockingbird is a story about racial views from a six year old’s perspective. In the small town of Maycomb, Alabama during the years of the Great Depression, Scout Finch must watch as an African-American man is wrongfully accused of raping a white woman. During those times, African-Americans were always being treated unfairly, and a young Scout doesn’t understand why everyone in her small hometown is against the innocent man. To Kill a Mockingbird serves as a great example for how race relations were treated during the first half of the twentieth century.
Although the novel came out fifty five years ago, it’s relevance still remains today in modern literature and English courses, specifically in high school.
To Kill A Mockingbird is Lee’s only novel ever published, so why is it coming up in the news today? Officially announced on February 3, Lee has come out to the public to announce an official sequel to her classic story, which will be titled Go Set a Watchman. The sequel will consist of an aging Atticus Finch, the protagonist of TKAM, and a grown up Jean Louise “Scout” Finch, the narrator of TKAM. Scout will be returning to her father in Maycomb, Alabama 20 years after the events of the first novel. Apparently, Go Set a Watchman was written before To Kill a Mockingbird, but was shelved away for many years, and inevitably re-discovered fairly recently by Lee’s agent.
Mixed feelings arose from numerous people. Many are concerned if the sequel will hold up to the original. Lee must know how strong of a presence her book has become around the world, especially in America, so releasing the sequel will garner both love and hate. She was hesitant at first, but after letting trusted people read the manuscript, Lee decided it would be safe to release the follow up. Catch Go Set a Watchman in a local book store due this July. 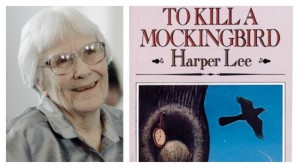