As the NFL regular season continues into its later stages, different players are making their case to win the MVP award at the end of the year. Here are the frontrunners as of now.

Tom Brady, Quarterback, New England Patriots: Many seem to forget that after the Patriots’ humiliating defeat at the hands of the Chiefs on Monday Night Football back in September, every sports talk show was questioning whether the “Golden Boy’s” glory days were over, and there were even rumors that he was going to be traded. The team and their franchise quarterback were left for dead and their reign over the AFC East was finally coming to end.
All of a sudden, just a few games removed from their Monday night beatdown, the team is rolling. Many are now predicting them to be the AFC champions and odds on favorite to win their fourth Super Bowl in the Brady era. The Patriots are 5-0 during this stretch, much to the credit of Brady. He has thrown for 1,601 yards and 18 touchdowns with just one interception during that span. His most recent defeat of last season’s MVP Peyton Manning (Brady had four touchdown passes) has earned Brady the midseason MVP award. If he continues to perform at this high level, look for him to bring home his third most valuable player award. So much for having nothing left in the tank.

Demarco Murray, Running Back, Dallas Cowboys: It has become very clear that this season is yet another classic example of no love for running backs in the pass happy, quarterback loving NFL. The league really needs to rename the award the MVQ (Most Valuable Quarterback) because Murray has received no love for his historic season. Quarterbacks will always be deemed the most important position, and it has been made more evident as of late having won the award six out of the last seven seasons. Murray recently set an NFL record for starting the season with eight consecutive 100 yard games. The previous record was six games, held by arguably the greatest running back of all time, Jim Brown. May it also be noted that the record stood for 56 years, compared to Peyton Manning’s much discussed touchdown record last season that all but guaranteed the MVP for him, which only stood for five years. Murray is also on pace to come near the single-season rushing yards record of 2,105, set by Eric Dickerson, and is projected over 2,000 yards on the ground. He very well may run this team into the Super Bowl, and maybe then he’ll win MVP.

Andrew Luck, Quarterback, Indianapolis Colts: Luck is quietly having an incredible season. When you factor in that he is on pace to surpass the single-season passing record set by last’s years MVP, Peyton Manning, and is on pace to throw for 50 touchdowns. He has the offense firing on all cylinders and has been all that the Colts envisioned he would be when they drafted him and released Manning. However, his team is dominating arguably the worst division in the league and Luck just doesn’t have the same sort of level of sexiness or flashiness that Brady does. That is fine with Luck, who enjoys flying under the radar, and he very well may dethrone Manning and Brady in terms of conference dominance this season when all is said and done. 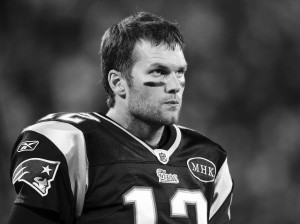