So hip, WOW famous— one dog, a Shiba Inu from Japan named Kabosa is now more famous than its owners could have ever imagined. A simple picture of the rescue dog was posted to its owner’s blog and has since become a highly recognized and very popular meme that can be seen on pretty much every single social media site.
The Doge (dough-juh) meme has been around since 201 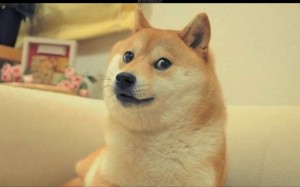 0 but has only become popular on the Internet within the last year or so. The picture found on the owner’s site was picked up initially by a Reddit user, and then the image spread to Tumblr. @DogeTheDoge has over 162,000 followers on Twitter, signaling its growing popularity. The concept of the Doge meme is so simple— easily edit the Dog to have thoughts around his head and people will think it’s funny— that it spread rapidly across the web.
The photo of Kabosa, who has become known as Shibe online, has been edited onto human bodies, bananas and loaves of bread. The bizarre placement of the dog’s head throws some people off, but to others it seems to not matter all that much. The expression of Doge’s face is what really matters and makes the meme so funny to some. Shibe can be either shocked, scared or judgmental, depending on the words that are written around him, often. Words are often brightly colored, improper in use and float around Doge’s face or body.
One of the most popular of these memes shows Shibe, looking afraid, on a Lost Dog sign. The sign reads “Such trubble, so scare, wow 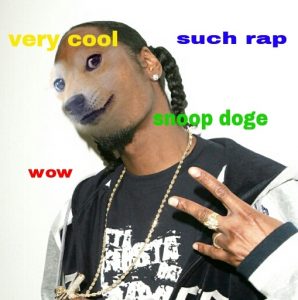 , much reward,” with the phone number 696-DOGE listed as contact information. Another popular image shows the Doge’s head edited onto the body of a suited man standing next to Toronto Mayor Rob Ford, labeling the Doge as an enabler of the infamous politician’s cocaine addiction. Literally anything could be made into a Doge meme, and apparently very little thought is required to do so. Among the strangest memes are Snoop Doge (a mingling of Snoop Dog’s and the Doge’s faces) and one that places Nicolas Cage’s face onto the Doge’s body.
Besides the strange memes, the Doge is becoming known for the Dogecoin, an online monetary system similar to the Bitcoin. The Dogecoin was introduced in December of last year and has become popular with people who either see it as a joke or as potential to make fast money. The Dogecoin (which is said to be worth up to $400 per coin at its highest) can be earned by participants who complete tasks or exchange goods and services, and the site gained over 2,600 subscribers within its first week.
Some people see the Doge as dumb and repetitive, for others the meme is simple and thoughtless entertainment. I noticed that mostly girls think that the Doge is funny, while guys tend to shrug it off, unimpressed. I personally love the Doge. I know it’s not really funny; I could just as well use letters from a Scrabble set to form words and then laugh at those.  But somehow I can read through the Doge’s Twitter page and by the end have tears in my eyes, while my friends look on and shake their heads. My friends don’t understand why I think it’s so funny, which is alright because I can’t find a way to explain it.

Leave a Reply to Doge Such WOW! Cancel reply