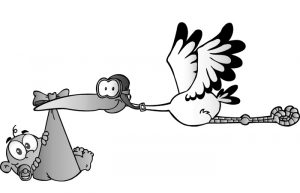 Pregnancy is a taboo subject among college aged women, which makes sense, since they’re now in their peak reproductive years. Women today, thankfully, have more of a choice when it comes to their bodies and deciding if and when to have kids. Although discussing kids might not be something on most college students’ minds, recent studies have brought to light an interesting and somewhat surprising discussion.  Often we hear about women who have difficulty conceiving, despite using all the“proper methods.” But having examined some of the methods that supposedly boost one’s chances, it’s no shock that women aren’t hitting up the maternity section after the first try.
Michaeleen Doucleff’s article “You’d Think We’d Have Baby-Making All Figured Out, But No,” from the medical journal, Fertility & Sterility, reported that in a survey conducted on women in the eighteen-to-forty age group, many had misconceived notions (quite literally) about getting pregnant. More than one-third of them thought it beneficial to try specific sex positions or raise the pelvis–perhaps through the old pillow-under-the-hips trick, on which Dr. Jessica Illuzzi (an OBGYN at the Yale University School of Medicine and a conductor of the journal report) commented, “There’s no evidence to support that.” A staggering ninety percent of those surveyed didn’t know that fertility is highest the two days before ovulation, so the prime time to try is often missed. Illuzzi also says that having sex multiple times a day could actually “hurt you in the long run,” since male’s sperm count is decreased with too much ejaculation. When her team issued an online survey in March, women of all different backgrounds were found to be misinformed about reproductive health as well. Out of the 1,000 women surveyed, more than half were ignorant to the importance of taking specific supplements at least a month before getting pregnant. A large number did not know that the possibility of miscarriages and genetic disorders increases with maternal age and that stress is likely a conception preventer. And the biggest shocker? About 25 percent did not realize that fertility can be hurt by smoking, irregular periods and STDs.
Curious about just how common reproductive fallacies are, I asked five women their take on the pillow theory and three thought it to be true (my own mother included!) I also encountered some other faulty beliefs: refraining from urination right after sex and keeping your legs propped up against a wall for a while. It’s apparently time for us females to ditch the myths and learn how we really work reproductively, even if we’re not planning on having kids for a while.