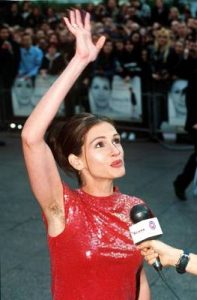 It’s eight in the morning and I’m looking at a clean line of blood running down the side of my ribs. I forgot to shave while I was in the shower, so I stand in front of my mirror, scraping the hair off my armpits with a fifty-cent disposable razor, dry skinned and eyes still bleary from the steam of the shower lingering in the bathroom. I slip on my t-shirt dress, now painted with a thin red streak, only to realize that I have found myself the brunt of a cruel trick: why am I shaving my armpits if no one is going to see them? I had become so used to my morning routine of marring myself that I forgot to think about why I was doing it.

The history of American women shaving is not as extensive as you may think. Although the Egyptians were known to use beeswax and alkali to strip their follicles of hair, us westerners did not start shaving until around 1915, with the increase in popularity of both sheer sleeves and higher hemlines on dresses. “The Woman of Fashion says the underarm must be as smooth as the face,” was a popular phrase used in early women’s razor ads.

I threw the question out to my friends and got a series of passionate responses. My friend Erin, who is an adjunct professor at a private college, said that she stopped shaving halfway through her undergrad years and immediately felt emboldened and renewed. She attributes some of her initial confidence to being in a healthy relationship with a guy who made her feel comfortable in exploring her options, but went on to say that her decision ultimately shifted her views on gender. “My body hair became more than a quirky experiment meant to make me feel unique or ‘comfortable’ with my ‘naturalness’; it redefined my understanding of beauty in relation to gender. Femininity and masculinity are finite terms and beauty is something we embrace rather than achieve.”

Many of the women I talked to who shave religiously said that in addition to making them feel empowered and sexy, shaving their hair also eliminates “bad” body odor. Others said that they had previously been in a situation where they felt comfortable growing their body hair out, but when they returned to their everyday life, found themselves bombarded with questions and strange looks. Ultimately, many of these women found it was easier to just shave.

Although deciding to remain in our untamed, hairy-state can be a political statement, it doesn’t have to be. A few of my friends said that they were just too plain lazy to keep up with regular grooming, and others said that they just don’t see the point. My friend Amanda responded coolly: “I shave sometimes and I don’t shave other times because it doesn’t matter.”

Like so many issues, the heart of the problem comes down to choice. Whether a woman chooses to shave should be up to her, and she shouldn’t be bullied into modifying her body for someone else.