Tattoos have been used as permanent displays of art and appreciation for centuries. They have been found on the skin of mummified remains, as well as being cultural markers among many native communities across the world. In America, the first recorded professional tattoo artist was a German immigrant, Martin Hildebrandt, who opened a shop in New York City in 1846. His work became popular among soldiers fighting in the Civil War, but were symbols of those in a higher class. After the electric tattoo machine was invented, it became a widespread and fashionable trend among men.

In 2017, it is more than a “trend.” College students especially seem drawn to having art permanently inked on their skin as a mark of fashion, aesthetic, symbolism, or memory. Since the 1970’s, the meaning of a tattoo has become less associated with deviance and more as a socially acceptable art form, but of course, many tattooed people trying to enter the workforce still face negative reactions from employers. Tattoo art is something that can be found on any person regardless of their class, race, age, and gender. It is one of the few aspects of Western society that is not inherently masculine or feminine. Art styles are incredibly diverse, too; those interested in getting ink have to put time and effort into researching artists and shops that have the quality and style of work desired. In Oneonta, there are four tattoo parlors ranging in price, quality, and style. The permanence of the art does not make it an easy thing to commit to for many.

There are also many main styles of tattoo art. Some of these include, but are not limited to, black and grey, traditional Japanese, New School, Old School, scarification, and watercolor. A tattoo artist is usually a specialist in one of these styles, so it’s smart to go to someone who has had a lot of practice and success within the desired style.

One SUNY Oneonta student, Jess Tyler, enjoys drawing tattoo sketches in her free time. Though she is not a professional tattoo artist, she has an emotional attachment to the art form, and has a few tats herself. When asked what about tattoos inspires her, she said, “I’ve always just loved the idea of having art be a part of you. Tattoos let you become a walking art gallery—they are a way to express yourself and a way to carry art with you all the time, and as an artist, that’s something I always thought was amazing.” She claims that her favorite style to sketch in is American traditional, for it’s “super bold and bright” and is often the style people picture when “they hear the word ‘tattoo.’”

Tyler also mentioned the large presence of tattoo culture on college campuses. She claims that this popularity is because “most college freshmen are 18 years old, so being able to finally get a tattoo is an exciting new privilege. It’s a way to exercise bodily autonomy.”

Tyler’s positive attitude towards tattoo art is a growing commonality among this generation. It is becoming a lot more normalized to be heavily tattooed and still employed at more “traditional” jobs. The future for tattoos and the artists that create them is hopeful, and the aesthetic obsession is bound to grow.

Here are some tattoos on SUNY Oneonta students: 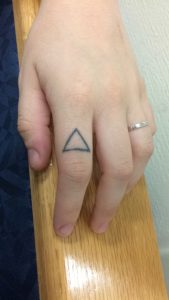 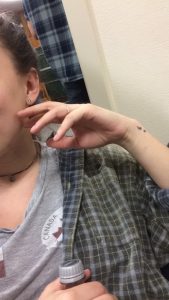 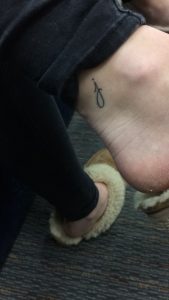 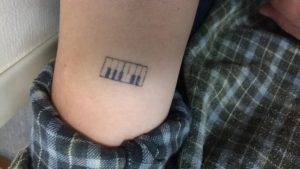 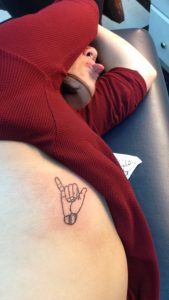 Buying Art on a College Budget

Contributing Writer, Eric Cullen | There comes a time in everyone’s life when they can no longer gift their beautiful mothers macaroni necklaces, wear Velcro shoes, or guiltlessly eat dessert before dinner. A few short […]