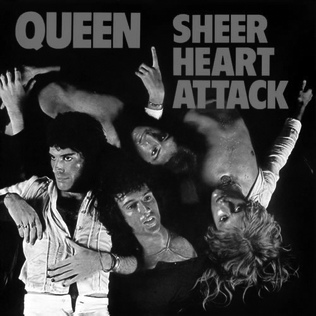 Sheer Heart Attack was the third studio album released by British rock band Queen. The album reached No. 2 on the UK Billboard Charts and was their first album to hit the top 20 in the United States. Queen began to steer away from the progressive sound of their first two albums in favor of a more mainstream hard/glam rock sound. The album was a commercial and critical success. It is considered an essential Glam Rock album and one of the best by the band. Personally, this is my favorite album by Queen. It is the first to have the classic sound that they are known for while still holding on to some of their progressive roots.

The album starts off with “Brighton Rock,” in which guitarist Dr. Brian May uses multiple guitar tracks and delay effects to create a fast, hard rocking song with a legendary guitar solo. The next track, “Killer Queen,” was written by singer Freddie Mercury; the lyrics are about a high class prostitute. It was the band’s first international hit, charting in the top 20 in the US and the UK. The song was unusual in that Mercury wrote the lyrics for the song while Brian May was in the hospital. Mercury played piano on the song and left spaces for guitar parts in the song. Up next was a rebellious track written and sung by drummer Roger Taylor called “Tenement Funster.” It was released on the same side of the “Killer Queen” single. The last song on the A-side of the album is called “Flick of the Wrist.” This mid-tempo ballad features the multi part vocal harmony style that Queen is famous for with an intense guitar solo persisting and building throughout the song.

The B-side of the album starts off with a short tune “Lily of the Valley” that leads into “Now I’m Here.” “Now I’m Here” is a classic Queen tune that became a live staple still performed today when the band plays live, featuring Adam Lambert on vocals for the late Freddie Mercury. I am not the biggest fan of the next song on the album, “In the Lap of the Gods,” as it is a repetitive piano ballad that sounds like a cheesy song from a decade before this album was written. Everything that the last track lacks, the next song makes up for. “Stone Cold Crazy” is perhaps one of the hardest rocking songs of the 1970s. The music magazine Q described the song as “thrash metal before it was even invented,” and rightfully so. The song is my personal favorite by Queen. It is fast, loud, it has several guitar and vocal solos, and the guitar riff is heavier than a mountain of lead.

Sheer Heart Attack may not be Queen’s most popular album but it is without a doubt one of their best. It combines the hard rock attitude of the mid 1970s with the progressive orchestral sound of Queen. The album is certainly worth a listen by anyone who is a fan of Queen’s other music or just likes good Rock n’ Roll.

Goo-Goo Gaga to Lady Gaga: An Evolution We Can All See

Alexandria La Flair, Staff Writer | Stefani Joanne Angelina Germanotta, otherwise known as Lady Gaga, has had a musical revolution unlike any other. From her official take off in late 2008 to almost ten years later, […]

Alexandria La Flair, Staff Writer | Most of us find cleaning and organizing to be a daunting, dragging task, but it is a necessary evil. With a pair of headphones or a loudspeaker, it can turn […]