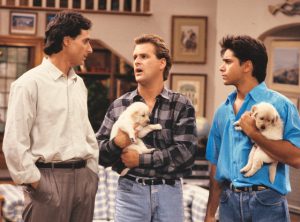 This past Saturday during Family Weekend, Dave Coulier, popularly known as Uncle Joey, came to SUNY Oneonta to do his stand-up show. It was a huge success with all of Hunt Ballroom being completely sold out for the event. The winner of this past weekend’s Family Weekend Variety Show was Laugh Club and they opened for Coulier.

Coulier talked about his time on “Full House” and the new sitcom he is on, “Fuller House” (which airs on Netflix). He then did his stand-up bit along with several impressions. This had the whole crowd of parents and students hysterical. He ended with busting out a couple tunes on his harmonica.

Following the show, The State Times was granted an interview with Coulier. His jovial personality continued off-stage as he answered the questions.

Michelle Behr: What have you been doing between when “Full House” ended and “Fuller House” aired, besides stand-up?

Dave Coulier: A lot of stand up. I write, I direct television, I do a lot of voiceovers. I’m the voice of Kellogg’s Raisin Bran, I did 65 Geico commercials last year, and I work on “China, IL” doing voices, and I do [Popeye on] “Robot Chicken.”

MB: Do you have a favorite impression?

DC: Yeah, [Popeye on] “Robot Chicken” is pretty awesome, but I have lots of hobbies. I like playing ice hockey, I play golf, I’m a pilot so I fly my airplane a lot, and I’ve had a lot of other projects in between.

MB: What made you decide to start doing stand-up?

DC: I come from a funny family. My family is really funny, and as a kid my relatives were always making jokes and we talked about comedians a lot and so I always admired, you know, George Carlin and Richard Pryor, and Jackie Gleason, and Groucho Marx, and Robin Williams, Steve Martin, and Johnny Carson. There were all of these wonderful comedians to watch. I had a partner in crime, Mark Cendrowski. He directs “The Big Bang Theory.” He’s directed that show for all ten seasons. We’ve been friends since we’ve been eight-years-old. We’re from the same hometown, we went to the same grade school, and the same high school. So we were always writing funny song parodies and skits. We had a little eight millimeter movie camera so we were always making stupid movies, like “The Coke Addict,” the kid that was addicted to Coca-Cola. So it was nice to have someone that thought the same comically from a young age, so that was a big part of it.

MB: I know Bob Saget [his co-star on “Full House” and “Fuller House:] also does tours, have you ever thought about doing anything with him?

DC: We have, but we have completely different styles so you know I can do shows in front of a family audience and Bob can’t. He’s my filthy Jewish sister.

MB: What is it like working on “Fuller House?” Is it the same or a little bit different?

DC: It’s the same. It’s eerily, surrealistically the same. They should have called the show “Full Circle” because that’s what I feel we’ve done, this one big huge full circle all these years later. It’s such a gift to be able to come back, doing a show, working with people you really love and care about. We’re really a very close family. We see each other all the time, we’re always texting each other, making stupid jokes. It’s wonderful to have people you work with so closely, to really feel like they’re your real family. It’s been a gift; it’s been a blast.

MB: Is there anything you can tell us about season two [of “Fuller House?”] Are we going to see either of the Olsen twins?

DC: You know they’re welcome to come back any time; I don’t think they will just because their lives have changed so much since. When we did the show, they were eight months old when we started. They don’t have the same references that we had. They were babies. I don’t know how many things I could remember when I was pooping my pants. They’re fashion designers of the year in New York City right now, and they run this business, and they’re so far removed from the show that we get it. It’s not like they can both come back because there was only one Michelle character on the show. I think from their perspective [and] we totally understand. If you don’t want to do it, you’re still part of the family.

MB: Do you have any advice you would give to Laugh Club on campus?

DC: Everyone’s walking down their own path. My path is completely different than anyone else’s and I can say that for any other performers that I know. You have to discover what that path is for yourself. People can give you tons of advice, but no one’s going to walk down the same path that I did. I think what a lot of people try to do is that they try to get inspiration [by] looking out at [celebrities, saying,] “I want to be that performer, I want to be Taylor Swift, I want to be Jay Z, I wanna be this, I wanna be that.” That’s okay to get that inspiration because it fuels you, but true inspiration really comes from inside, and you have to be able to go way deep inside yourself to find out who you are so that you can be creative and give that to the world.

Too many people are going, “That’s the career I want. I’m gonna do everything that person’s done.” That’s a big mistake because everyone has different tools inside of them which makes you completely unique, and you just have to discover what those tools are and use them to make yourself a unique property to the world. You gotta work you’re a** off. In show business you have to work so hard, or everyone would be starring in a series, making millions of dollars every year.

To get there you have to beat out everyone else and that’s really hard, that’s a big undertaking. You really have to put the blinders on. You can’t be afraid of rejection because you’ll lose most of the time. You’ll get one job but you’ll be told you don’t look right, or you’re not handsome enough, or you’re not tall enough, or you’re too big, or too little, or your hair color is not right, or we didn’t like your voice. If you can handle all of that and walk away and go, “Oh well, next time,” then show business is right for you, but if you think it’s going to be unicorns and buckets of gold go into the IT world.