Going into the weekend, the Oneonta Women’s Basketball Team had already amassed an 11-3 record in the SUNYAC, having already clinched a trip to the playoffs. Next on the checklist was a personal goal that every ballplayer looks forward to when they start fresh with another team — 1,000 points.

Senior Lyteshia Price became the eighth woman in Oneonta history to amass 1,000 points in her career. Price knocked down a three-pointer in the third quarter to put her at 1,001 points for career. She would go on to finish with 12 points in the game as the Red Dragons took down the Brockport Golden Eagles 47-42.

After trailing much of the game, the Red Dragons clamped down defensively in the fourth quarter, holding the Golden Eagles to just four points on 2-16 (12.5 percent) shooting, forcing four turnovers in the process. The women continue to prove why they are amongst the top in SUNYAC defensively with lockdown performances like this.

The women dropped the following game against SUNY Geneseo 56-45 after an early 10-0 run proved to be insurmountable down the stretch. The women split the weekend matchups, leaving with a 12-4 record in the SUNYAC (16-7 overall).

Although Oneonta’s women have already clinched a playoff berth and are fighting for the top seed in the SUNYAC standings, the men must finish the season strong to qualify for a SUNYAC berth.

The road to a playoff berth didn’t get any easier for the men after dropping both games this past weekend. The losses pushed the men down to 8-8 in the SUNYAC with one playoff spot yet to be determined.

In Friday’s action, the Oneonta men could not get anything going as the Golden Eagles led for the majority of the game. After finishing the first half down 13 points, the Red Dragons stormed back in the second to take the lead 43-42 from a three by junior Grant Massaroni. Brockport responded quickly with a 12-5 run to pull away from Oneonta, eventually winning the game 65-56.

On Saturday, the Geneseo Knights caught fire as they shot 51 percent for the entire game (40 percent from three). The Red Dragons held the lead for the majority of the first and second half. Hot shooting by the Knights propelled them to victory as they took the lead with a little over ten minutes to go on a three-pointer by Jonathan Cohen. The lead would remain in favor for Geneseo as they would go on to win 79-74.

Both the men and the women travel to Western New York to take on Fredonia and Buffalo State on February 19 and 20. The women have the opportunity to clinch the top seed in the SUNYAC, but they would need at least one loss from New Paltz. The men can clinch the final playoff spot in the SUNYAC with a weekend sweep. 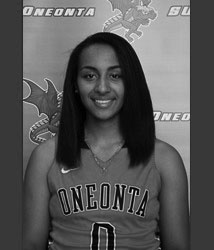