A smart phone was a luxury item that slowly became an essential in today’s society for many people, especially millennials. There is no questioning their usefulness on an everyday basis to today’s college student. I personally use my phone for calling, texting, weather alerts, as an alarm clock, social media, and music. My cell phone is often the first thing I look at in the morning and the last thing I look at before I go to bed, which many in the older generations would probably criticize me for. But this criticism comes from a misunderstanding of the cultural significance of cell phones: although cell phones seem like they’ve been around forever to the current college student, to a baby boomer they are foreign objects. 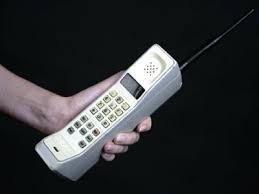 ns such as police forces, the military, and postal system communicated via radio frequencies. In 1973, Motorola debuted the first hand-held cellular phone, the Motorola DynaTAC. The first public phone call on a cell phone was made on April 3, 1973 by the Chief Executive of ArrayComm, Martin Cooper, who is commonly credited with creating the first cell phone that could be commercially used. These cell phones were like bricks in design, and were considered too heavy to carry around in a purse or in a pocket, so were typically kept in cars.

The first cell phone that was considered small enough to carry was introduced in 1983 and called the DynaTAC 8000x. The DynaTAC 8000x, aside from having a name reminiscent of a vacuum, weighed two pounds, offered a half an hour of battery charge, and was priced at $3,995. Cell phones became a status symbol: something that TV sitcom heartthrobs and business moguls owned, not your “Average Joe.”

The first SMS text message was sent in 1993. This was also the first year that data packages were offered and the first cell phone combination was introduced. In 1996, the “clamshell” flip phone design was first introduced into the market, as was the first “smart phone,” the Nokia 9000 Communicator, with an Intel 380 CPU. Cameras were first added to phones in 2002, although the images were very low quality.

The iPhone was introduced by Steve Jobs on January 7, 2007 and revolutionized the design of cell phones. Instead of using a stylus to aide with touchscreen use, the iPhone used a touch screen display. Now, a stylus is just an accessory mostly for women with impossibly long nails. In addition to the display, the iPhone could sync to iTunes like an iPod but place calls like a mobile phone.

Now, the two largest smart phone competitors are Samsung and Apple with their phone model lines the Samsung Galaxy and the Apple iPhone. I am a personal fan of Samsung’s Galaxy line, as I find the Android operating system and layout more user-friendly on a day to day basis. Cell phones have contributed positively to our society in many ways. I can send a quick text to my sister attending another college to let her know that I am thinking of her without interrupting her class. I can Snapchat and automatically share with my family and friends pictures of the trees changing color outside on the hills of Oneonta. Although cell phones have changed so much and seem so foreign to many older people, cell phones have revolutionized our society and are definitely here to stay, for better or worse, as it is always less than three feet away from me at all times.