The finalists for the 2014 Baseball Hall of Fame have been announced and voting time is fast approaching. There are 18 players on the ballot for the first time, most notably; Greg Maddux, Frank Thomas, Tom Glavine, Mike Mussina, Moises Alou and Jeff Kent. While we all know about the debacle last year where no one was enshrined in Cooperstown, this year will be different. Maddux, Thomas, along with Craig Biggio and Glavine are shoe-ins this year.

Maddux dominated baseball for an incredible 22 seasons, most notably with the Chicago Cubs and Atlanta Braves. The “Mad Dog” garnered 355 wins (eighth all-time) over his storied career along with a career 3.16 ERA and 3,371 career strikeouts, placing him in good company of only 16 pitchers with 3,000 or more. He also won 18 Gold Gloves, as the best fielder at his position. Maddux became the first pitcher in history to win four consecutive Cy Young awards (1992-1995) and is the only pitcher to win 15 or more games for 17 straight seasons. He is also one of only 10 pitchers in the 300 win and 3,000 strikeout club. In addition, he won a World Series with Atlanta in 1995. Maddux will receive more than the necessary 75 percent vote to get into Cooperstown.

Next up is another first balloter, “The Big Hurt” Frank Thomas. Thomas played for 18 seasons, mostly with the Chicago White Sox, but also with the Oakland Athletics and a brief stint with the Toronto Blue Jays. A first baseman and designated hitter, Thomas hit a total of 521 home runs and maintained a career batting average of .301, putting him in the company of Babe Ruth, Ted Williams, Mel Ott, Hank Aaron and Willie Mays. He accrued 2,468 hits, 1,667 walks and 1,704 RBIs over his career along with two American League MVPs in 1993 and 1994 and a World Series title in 2005 with the White Sox. He also won four Silver Slugger awards.

Craig Biggio is in his second year of eligibility after falling short of 75 percent last year (68.2 percent). He suffered from being on a ballot with notorious steroid users which include Barry Bonds, Sammy Sosa and Roger Clemens. Biggio played his entire 20 year career with the Houston Astros (1988-2007). He collected 3,060 hits, 414 stolen bases, 291 home runs and a .281 average over his career. In terms of hardware, Biggio garnered four Gold Glove awards (second base) and five Silver Slugger awards. Biggio will get his well-deserved place in Cooperstown this year.

The last person that will gain entrance to the Hall will be longtime Braves pitcher Tom Glavine. Glavine pitched for 21 seasons for the Braves and New York Mets. He is one of six lefties to earn 300 career wins and has a career ERA of 3.54 and 2,607 strikeouts. Glavine was a two-time Cy Young winner and was a 20-game winner five times. Throughout the 1990s, he and teammate Greg Maddux won more games than anyone else in the National League culminating in World Series title in 1995 with Atlanta. Glavine will join longtime teammate Greg Maddux and former Manager Bobby Cox in Cooperstown. 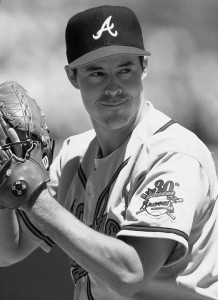